Is it just me or is everyone really jumping the gun on the holidays this year? Not to sound like a Grinch, but it overwhelms me to already hear Christmas music on multiple radio stations, holiday decor on every aisle at Harris Teeter… not to mention that my office Secret Santa has been organized since September. And Thanksgiving hasn’t even happened yet!

Our family is obviously not ready to experience the upcoming weeks ahead without our Tyler, but in my mind I am trying to slow atleast this week down and focus on what I have to be thankful for. All I can think about is how grateful I am that Tyler had 28 Thanksgivings spent with so many people important to her- her family, her friends from all over, and even her sweet boys at the ranch. So this is my reflection on some of those days.

I can’t clearly recall any Thanksgivings before I was 15ish.. and shockingly couldn’t find any photographic evidence from my camera-addicted Mom to refresh my memory. As close as we are with our extended family, we surprisingly lacked an ongoing Thanksgiving tradition with them. Maybe because 90% of us (including both my mom and dad’s families) all lived in Rocky Mount and saw each other on a nearly daily basis. I do have some vague memories of Thanksgiving meals at Gran’s house with Tyler, my cousins and me. The 6 of us (pre-Josie days) being squished together at a 4-person table that just barely fit in between the front door and the bottom of the staircase.

The Thanksgiving memories I remember the most with Tyler were when we were in high school/college. Our family started a new tradition of spending Thanksgiving at our dear friends, the Rascoes. They live way out in the country in NC, where life is peaceful and serene- that is, until Thanksgiving day at the Rascoes. You haven’t done Thanksgiving until you’ve done it with them. They graciously hosted over 100 guests at their home, with room after room of food- starting with appetizers of fried oysters in the back yard, followed by atleast 7 full turkeys and all the trimmings. Once everyone was stuffed with food (and maybe just a little booze), out came the skeet & guns. Tyler loved spending these Thanksgivings with our friends, especially her best bud Raggs. It gives me a little bit of comfort to think that Tyler can have another Thanksgiving with sweet Mr. Peter Rascoe, who is in heaven with her.

Terrible quality photo (blame it on cell phones in 2006) but I still have to share because its a favorite. All the kids (plus one big kid- Munroe Bell) at the Rascoes on Thanksgiving. 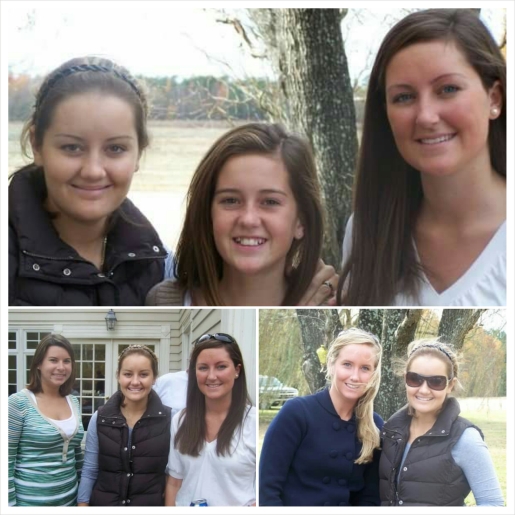 Thanksgiving 2007 at the Rascoes. Poor Ty had just had her wisdom teeth removed.

One of the best parts about spending the holiday in Bertie county was that it was halfway between Rocky Mount and Nags Head, so we would go from there to the beach for the weekend. It was always freezing cold, so we spent most of it inside doing a whole lot of nothing- the best kind of nothing. And of course, mom always forced us to take our yearly christmas card picture.

Talk about awkward family photos… Josie laughed so hard during our photo session that she had a wee accident.

Thanksgiving 2008 was one of the last we shared with Tyler, because she headed out West the following Fall. Although she did visit home frequently, this was never the case during Thanksgiving. November was one of her favorite times in Jackson, because the snow was falling hard (fresh pow!) and Thanksgiving is the opening weekend of ski season (not that Tyler actually needed the lifts to be open for her  to ski…). So from 2009 to 2013, her Thanksgivings were spent with her Jackson friends.

From Tyler’s best friend Maddie McQueeney: Jackson thanksgiving’s are a huge tribute to the tight-knit family atmosphere we’ve formed as a result of being so far away from our actual families. (We did Friendsgiving before it was cool.)

Tyler and Annie, Thanksgiving 2009, their first in Jackson

Tyler and sweet Molly (no, not Milly. Molly. Who was a big part of the reason Tyler decided to adopt a dog) 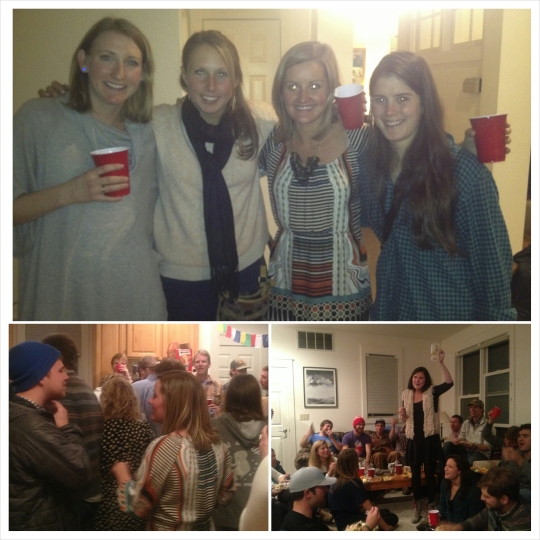 Thanksgiving 2012 as told by Maddie: We were all scattered the years before this at different, smaller gatherings.  We did have one massive gathering at the Yellow House in 2012. It was a little hazy, so I can’t say I have any real Tyler specific stories… But it was wild! We all had such different friend groups back then, and invited everyone, so it ended up being huge! We hosted 60 people for dinner, and then had 80 for drinks after. We filled four long tables with food options (it was a pot luck style dinner). Made 4 turkeys, and had 3 kegs. When I woke up the next morning the walls were covered in Sangria, and someone had put the leftovers outside to refrigerate them. But since we live in the wild, an animal had obviously gotten into it… It looked like a scene out of a horror movie. But it was so fun!! Such a big Jackson family gathering. I went skiing with Tyler the next day, so I remember being in a huge rush to clean everything up so I could get there. Because, obviously, no hangover could stop us from skiing…

This is the one pic I have of Tyler skiing from that day. Obviously 100 yds ahead of me, so you can’t see her face at all. And of course Milly came too.

Thanksgiving 2013 in a Ski Town with Tyler by Will Field:  I can’t wait. This is one of my favorite holidays of the year: A Skids’ Thanksgiving. Our families are thousands of miles away in the Old Country so let’s band together like orphans and cook a feast. The kitchen is a beehive and the hallway is logjammed with coats and boots. Welcome to a mountain town late in the off-season. Temperatures are plunging. Everyone has skinned up Targhee Mountain or south of the Teton Pass and gotten their early season turns. Jackson Hole Mountain Resort is not open yet. Half the guests are unemployed and that same half arrives with beer and waits patiently until food is ready. There are almost as many dogs as humans, and of course Milly ignores all of them. Milly slaloms between peoples’ legs and hunts scraps of food. She gets shooed out of the kitchen again.

This is a holiday that Tyler loved. It was, in a few ways, just like her: unorthodox on the surface, yet steeped in warmth and tradition. 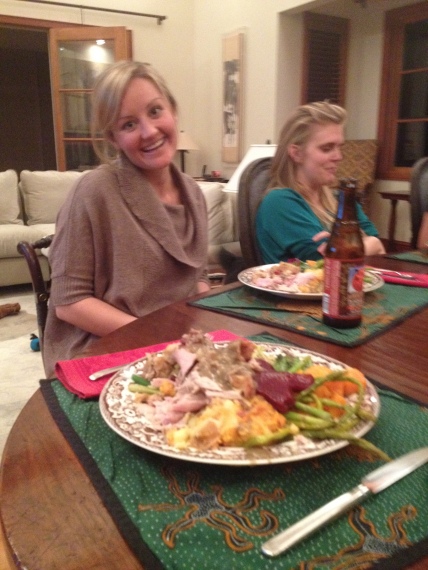 I recently found an old picture from that Thanksgiving that I spent with Tyler. It knocked me into a that stare-at-nothing type of nostalgia that certain photos of her can do. She looked gorgeous in her shawl and sat next to me at the head of the table beaming a smile with her head cocked affectionately. That year I had taken the responsibility of cooking the bird (never cooked a turkey previously) and of course that put me on edge. Her calm confidence cooled me down throughout. She had that straightforward way of thinking and a clear, low-volume voice that helped herself and others through stress. This time it worked. Of course I nailed it and everyone loved how the main dish turned out. Thank you, Tyler. I did it! You helped. Thank you for being there.

Will mastering the turkey

Like I said above,out family usually didn’t even consider attempting to persuade Tyler to come home for Thanksgiving because we knew it was impossible. Not only was the skiing a priority for her, but she also often had to work at the ranch on holidays. This past Thanksgiving came only 3 weeks after my wedding, so I definitely knew she wouldn’t be coming home again so soon. But somehow the stars aligned, her schedule was free, and she and Milly spent her last Thanksgiving with us in Nags Head. As she always did when she planned last-minute trips home, she attempted to surprise me, but always gave it away early because she was too excited. She made a delicious sweet potato casserole and some very interesting cookies (I think they were gluten-free). It was a wonderful weekend spent with my dad, Gran, Stacy, Teresa and her family, plus all Buch’s family was there as well. We missed not having my mom and her family there, but we promised mom next Thanksgiving we would be with her. 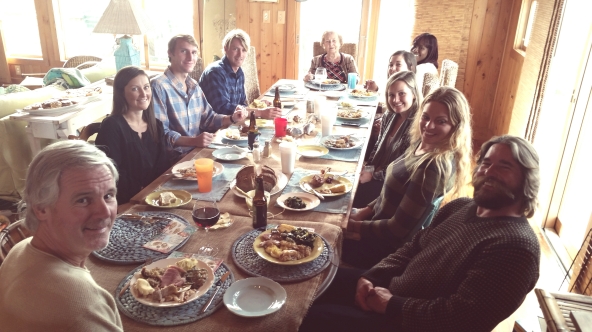 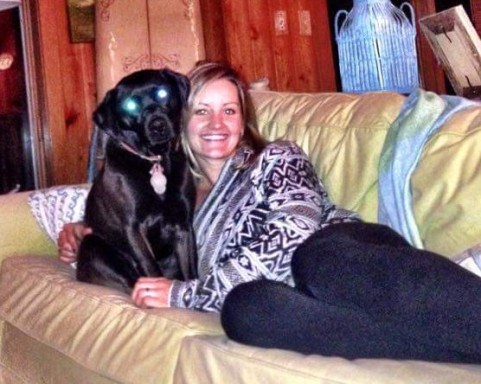 A sweet little indian at her kindergarten Thanksgiving play

One thought on “Thankful”