It was about this time last year that Tyler traveled from Jackson WY to NC and the Outer Banks.   It was a very special and memorable time for her, her loved ones and so many others. Seems like it was just last weekend.

On her last night here after a great dinner with family and friends, we ventured out to a karaoke bar and one of the songs performed was Paul Simon’s “50 ways to leave your lover”.   On Tyler’s return to Jackson she climbed a middle Teton and at 11,000 feet she chose to sing this song.   Wow!   The video can be seen below.

After a big night of being “over served” Tyler was incapable of driving herself to Raleigh Durham for the return flight so arrangements were made for duel drivers to get her there just in time. Sometime along the way Tyler instagrammed Blair the photo and comments posted below.   It pulls at me everytime I look at it.

For some strange reason, a couple of Tylerisms came to memory today.

There was the time she was driving home alone from the outer banks to Rocky Mount and after crossing the Alligator River bridge onto the deserted stretch on east lake, there was a car broken down on the side of the road with two women and a man standing alongside.   Tyler, being the Good Samaritan and without fear of endangering herself to 3 complete strangers, pulled over to see what was the matter. They were out of gas and out of money. Tyler loads them in her car and drives them back to the service station at the river, pays for the gas and as they were about to leave, the man says to Tyler “I sure am thirsty, could you spare me a little?”. Without a second thought, Tyler hands him her last 5 dollar bill. A few minutes later he returns from the store with a Miller High Life Tall Boy!

Another time Tyler was on her way home from work at the Outer Banks YMCA when she sees a huge turtle in the road on the bypass attempting to cross 5 lanes of heavy traffic. Once again, she pulls over and without regard for her own safety she dodges cars from both north and south, grabs up the turtle and deposits it safely in a canal alongside the road.

Such a big heart in so many ways.

Today at 1PM it was 48 weeks ago that Tyler went to be with our Lord and Savior.   Saturdays are tough. Her family and friends miss her, but we all find a way to get through it knowing she is in a better place.   God Bless her. 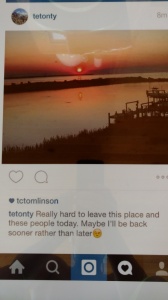 2 thoughts on “Tyler’s Last Visit to the Outer Banks”